From Reach for Excellence to Capitol Hill 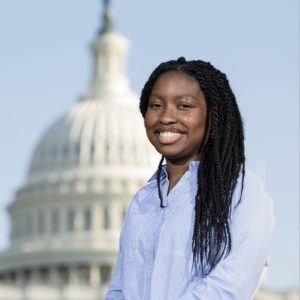 Anya Bibbs (Cohort ’17 O) and her mother moved from Ohio to Atlanta in 2014. It was a difficult time for her family as they tried to re-establish themselves for a fresh start in a new community. Anya switched schools often during that time. Her counselor at Peachtree Middle School introduced her to Reach for Excellence and recommended that she apply for the program. Anya kept the application process going even as she switched to Shiloh Middle School during the year.

She remembers her surprise at receiving the “fat letter” of acceptance to Reach for Excellence. She did not expect to be accepted and was amazed that people would choose to invest in her education by offering her this opportunity.

Traveling to Reach for Excellence for Saturdays and Summer Sessions would be difficult. Anya lived in Gwinnett County, and her parents didn’t have a car at the time. So Karen Dessables and the Reach teachers arranged for a bus route to stop at her home in Gwinnett, picking up Anya and other students. Veteran teacher Mr. Andrew Quinn drove that Gwinnett route for most of Anya’s time in the program.

Reach for Excellence was an enriching experience for Anya. Even though she came to Reach not knowing any other students, Anya was inspired to be more outgoing. She learned that it’s really not that hard to strike up a conversation. As a result, she became much more social and learned to work with new people. This growth stayed with her throughout high school. It shaped her belief that belonging comes from finding commonality in diversity and experiences that help us see that we are “all in the same boat.”

At Shiloh High School, Anya tried to be very active in as many clubs as possible. She wanted to be engaged in her community. She joined Quest Bridge Prep Scholars in her Junior year, eventually becoming a matched Quest Bridge Scholar by December of her Senior year.

Anya sought help for her personal essay and application materials from an online resource but mainly felt on her own for the college application process. Her school did not have enough counselors to work with individual students in her senior class of about 500. Anya struggled to write her essay until the night before it was due. She wanted to be an applicant that stood out but wrestled with how to share her story – the difficulties she and her family had faced during her school years and the impact they felt. It is one thing to write a compelling narrative. Being vulnerable with strangers in a story you are still living is another.

Once again, Anya did not expect to be accepted. However, she was matched with Yale University through Quest Bridge, now in her second year. Most of all, she loves the people at Yale. She goes to class with Olympic athletes and has met renowned poets, TED speakers, and other exceptional people who are pretty down-to-earth. She made friends quickly and continues to live with the same group from her freshman year.

Anya spent the Summer of 2022 interning in Washington, DC, with the National Summer Learning Association and the Office of Senator Jon Ossoff. She stayed at American University with interns from around the country, including fellow Reach for Excellence alum Jahari Fraser (Cohort ’14 L). All the interns had been a part of Summer learning programs like Reach for Excellence. Anya found that same sense of belonging through daily living and working with people she had never met.

Her experience in middle school had come full circle. A quiet student on a 45-minute bus ride to Reach had found her way to Capitol Hill, answering phones, giving tours, and seeing politicians whose policies shape our communities daily.

Anya is interested in studying abroad soon and sees herself pursuing a career in public service at the local level. She wants to be a part of increasing equity in communities and promoting intergenerational economic mobility.

Her message to current Reach students: Keep showing up. You may not understand the opportunity at this moment, but it might become much more than you imagine… even an internship on Capitol Hill.